Incidence of fuel poverty in Rotherham

Living in cold housing can indirectly harm health. It affects children’s educational attainment, emotional wellbeing and resilience, limits the dietary opportunities and choices people make and the impact of cold on dexterity leads to a higher risk of accidents and injuries.

Based on the latest, 2019 national fuel poverty statistics, Rotherham has seen a reduction in the numbers of residents living in ‘Fuel Poverty’ year on year. In 2019 Rotherham had 10.1% of households living in Fuel Poverty, the lowest level in South Yorkshire and lower than the national figure of 10.9%.

Although the overall number of people living in fuel poverty has decreased, in certain areas of high deprivation and poor insulated housing stock, numbers have increased considerably.

The Council's draft vision is that; “We want less people, year on year, to suffer from living in a cold home”

And the draft aim is; “To empower and support Rotherham residents to take active steps to improve the energy efficiency of their homes and improve their health and wellbeing”

The Council’s private sector housing stock data, produced by the Building Research Establishment (BRE) shows that the performance of the housing stock in Rotherham when compared to the English Housing Survey (EHS) England average is mixed, with Rotherham performing slightly better for all hazards and excess cold, but worse for falls, disrepair and fuel poverty (particularly the 10% definition) and low income households. Compared to the regional average the picture is slightly different with Rotherham performing similarly across most of the indicators except for all hazards, and excess cold where there are lower levels and low income households where there are higher levels compared to the regional averages. This data contributes towards identifying the level of fuel poverty across the borough. The following maps show the incidence of fuel poor households in Rotherham. 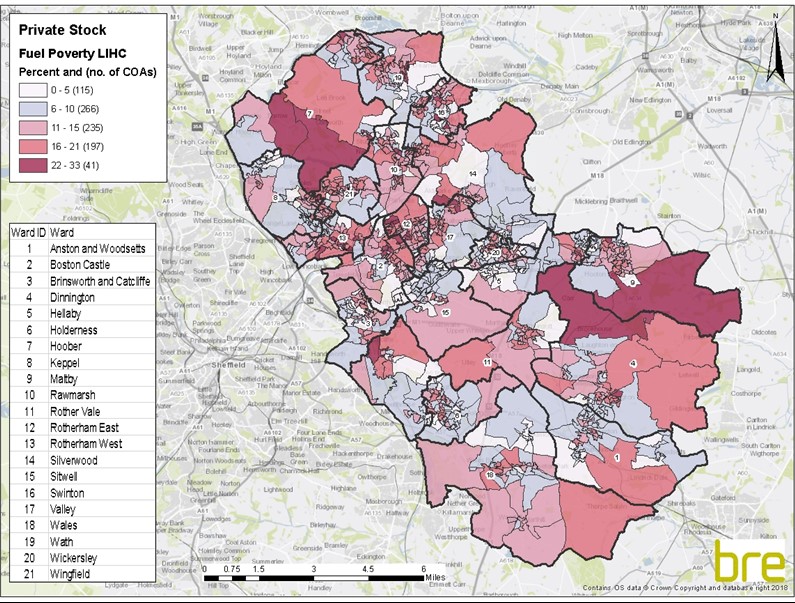