Stay 2 metres apart. Wash your hands often. If you have symptoms get tested. 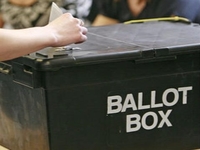 Rotherham Council has received nomination papers from candidates standing in the three constituencies in the borough at next month’s General Election.

Papers were received by 4pm on Thursday 14 November for the Rother Valley, Rotherham and Wentworth and Dearne constituencies.

The candidates are confirmed as:

The deadline for members of the public to register to vote is 4.00pm on Tuesday 26 November.

The full statement of persons nominated for each constituency can be downloaded here: