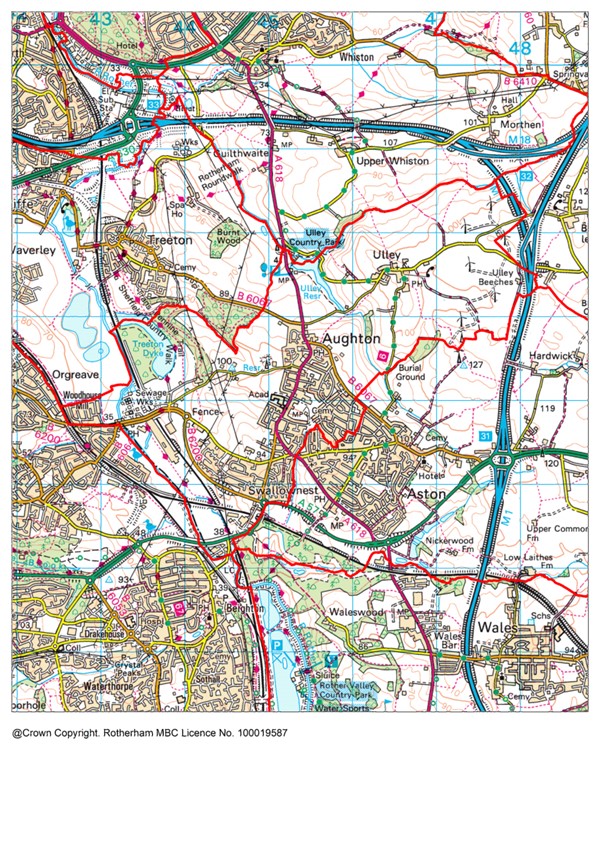 Aughton and Swallownest ward is in the south-central part of Rotherham with a population of 6,372 (2019 estimate). The ward is represented by two members of the Council. Although the ward covers a large rural area, most people live in the suburban areas of Aughton and Swallownest, along with the village of Ulley (population 163) and the southern tip of Orgreave parish.
The ward is served by three parish councils including the North and West wards of Aston Cum Aughton parish (total parish population 152,920; Orgreave parish (population estimate 739); and the whole of Ulley parish.
The most deprived parts of the ward are Aston north west followed by north Swallownest. The hilly landscape around Ulley Reservoir forms the setting for a country park.

Population change since 2011: -32 (-0.5%) (Rotherham +3.2%)
The population of Aughton & Swallownest ward has hardly changed since 2011 in contrast to the increasing borough population. The age structure of the population is similar to the Rotherham average.

Aughton & Swallownest is heavily owner occupied with most houses either detached or semi-detached. Most rented housing is semi-detached and there are few detached houses.
Council Rented Properties in 2020: 507 (375 houses and 132 flats), 18% of dwellings.

Aughton and Swallownest has a high proportion of local employment in Education and is above average for public services as a whole. The proportion of employment in production industries is significantly below average. Employment levels in the ward depend on opportunities elsewhere as local jobs are only sufficient for 28% of local workers.

The proportion of people claiming benefits of all types in Aughton & Swallownest is well below the Rotherham average.

Child poverty in Aughton & Swallownest is below the Borough average.

Over 70% of health and lifestyle indicators are better (have lower rates) than Rotherham average. Additionally, a half of indicators are significantly better, particularly in terms of lower rates of hospital stays for self harm and emergency hospital admissions for Chronic Obstructive Pulmonary Disease (COPD). The period the data relates to is shown as (a) to (f) below and explained in the notes.

Compared to Rotherham average, Aughton & Swallownest ward is better for (has lower rates/less):
Admissions for injuries in 15 to 24 year olds and in under 5s (f); children with excess weight reception year (e); deaths from all cancer all ages, from all cancer under 75, from all causes all ages, from all causes under 75 years, from causes considered preventable, from circulatory disease all ages, from circulatory disease under 75 years, from coronary heart disease all ages, and from respiratory diseases all ages all persons (c); emergency hospital admissions for all causes, for Chronic Obstructive Pulmonary Disease (COPD), for hip fracture in 65+ and for Myocardial Infarction (heart attack) (d); hospital stays for alcohol related harm (broad and narrow definition) and for self harm (d); incidence of lung cancer (a); obese children reception year (e).
In contrast, Aughton & Swallownest ward is worse for (has higher rates/more):
Deaths from stroke all ages all persons (c); incidence of colorectal cancer and prostate cancer (a); smoking prevalence at 15 years regular and at 15 years Regular or Occasional (2014).
Aughton & Swallownest ward has higher (better) life expectancy at birth compared to Rotherham overall (nearly 4.5 years more life expectancy for men and nearly 1.5 years more for women) (c).
The Top 5 better and worse indicators are shown below (see Notes):

Anston & Swallownest ward has below average infection rates for Rotherham and ranks 23rd out of the 25 wards. 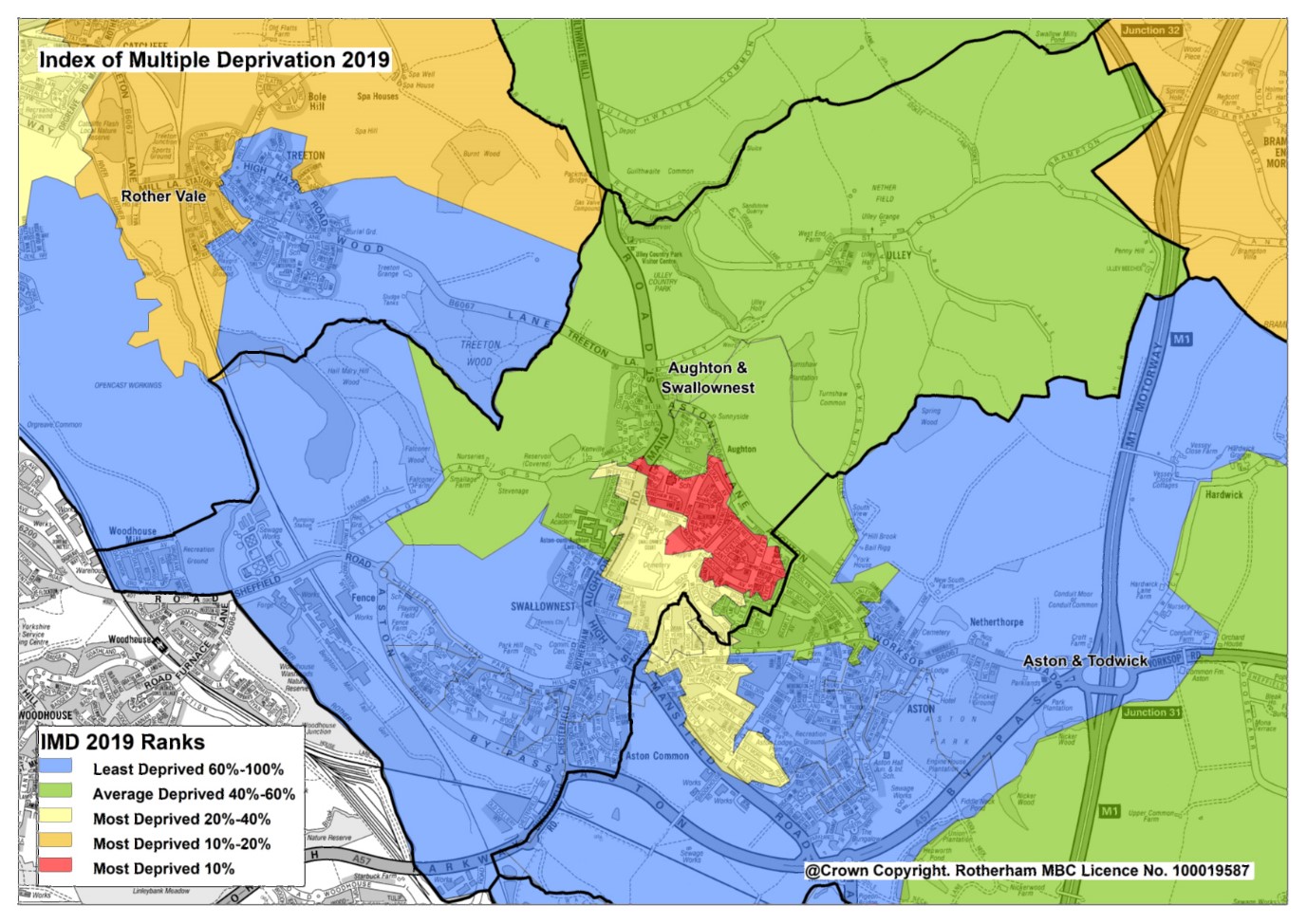 Deprivation in Aughton and Swallownest

Deprivation in Aughton & Swallownest is below the Borough average and in most of the ward is also well below the national average. There is 3 neighbourhood which is more deprived than the ward average, Aston North West is within the most deprived 10% of England.

Income deprivation is marginally below average in Aughton & Swallownest for many age groups. Children are more likely to be affected by income deprivation than adults, with the level slightly above the Borough average.