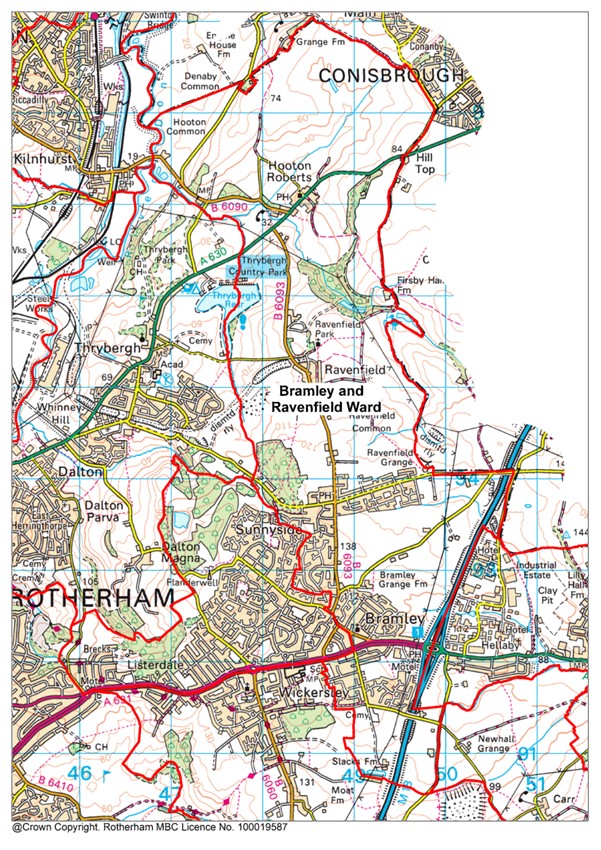 Bramley and Ravenfield ward lies in the north east of the Borough, with a population of 9,395 (2019 population estimate). The ward is represented by two members of the Council. The ward covers a large rural area but most people live in the Bramley area along with Ravenfield Common. North of the main residential area the ward is rural with the villages of Hooton Roberts and Ravenfield set in open countryside including part of Thrybergh Country Park. To the east of Bramley, the ward borders junction one of the M18 motorway.

The population of Bramley & Ravenfield ward has hardly changed since 2011 in contrast to the increasing borough population.  The age structure of the population is significantly older than the Rotherham average, with the percentage aged 65+ being well above average.

The number of dwellings in Bramley & Ravenfield has increased by 279 (7%) since 2011 and there are 254 more households (+6%). There are 25 more dwelling than households in the ward indicating a small property excess.

Housing in Bramley & Ravenfield is mainly owner occupied, mostly detached and semidetached. The ward has relatively high proportion of private rented housing, most of which is semi-detached.

Bramley & Ravenfield has few jobs in production industries and a varied pattern in the service sector, with many jobs in motor trade, wholesale & retail, health, and education. Employment levels in the ward depend on opportunities in other areas as local jobs account for 22% of local workers in 2019.

The proportion of people claiming benefits in Bramley & Ravenfield is below the Rotherham average.

Child poverty in Bramley & Ravenfield is below the Borough average.

Bramley & Ravenfield had rates of poor health and disability below to the Borough average in 2011 and was higher than the national average. The proportion of people on disability benefits is similar to the Rotherham average.

Over 90% of health and lifestyle indicators are better (have lower rates) than Rotherham average. Additionally, a half of indicators are significantly better, particularly in terms of lower rates of emergency hospital admissions and premature deaths. The period the data relates to is shown as (a) to (f) below and explained in the notes.

Compared to Rotherham average, Bramley & Ravenfield ward is better (has lower rates) for:

In contrast Bramley and Ravenfield ward is worse for (has higher rates of):

Bramley & Ravenfield ward has slightly below average infection rates for Rotherham and ranks 12th out of the 25 wards.

Levels of recorded crime and ASB in Bramley & Ravenfield are less than half the Rotherham average. 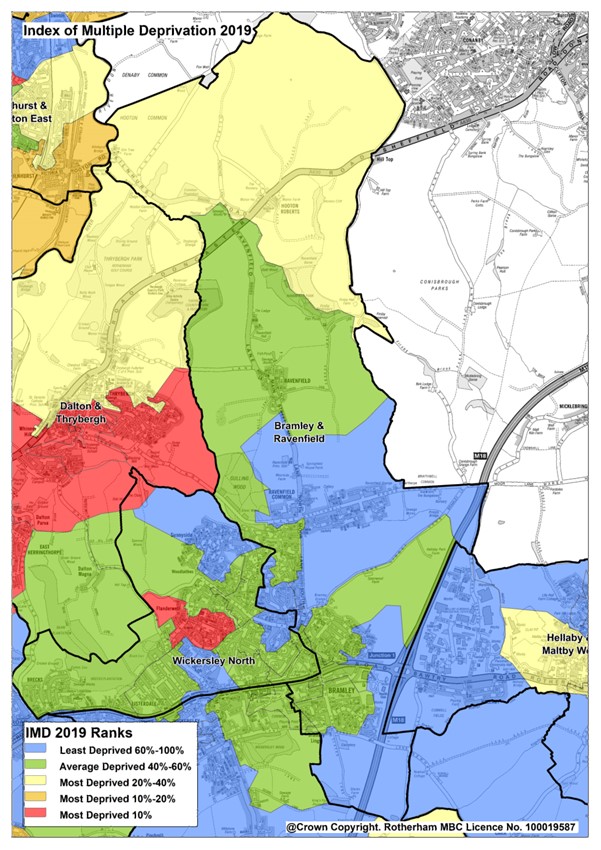 Deprivation in Bramley and Ravenfield

Deprivation in Bramley & Ravenfield is well below the Borough average and in most of the ward is also well below the national average. There is 1 neighbourhood (Bramley Grange) which are more deprived than the ward average, however there is no neighbourhood that falls within the most deprived 10% of England.

Income deprivation is below average in Bramley & Ravenfield for all age groups. Children are less likely to be affected by income deprivation than adults aged over 60, with the level being well below the Borough average.