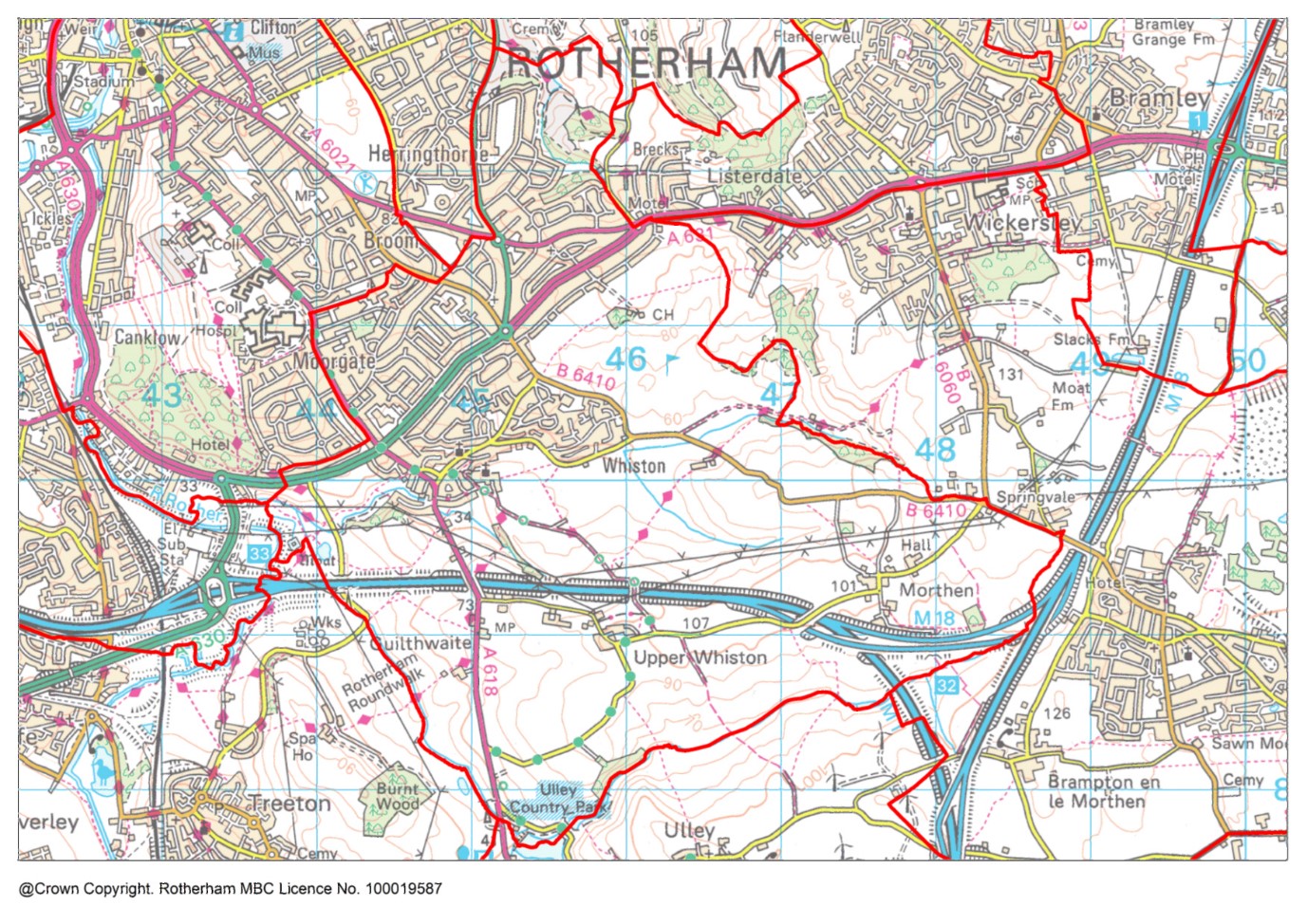 Sitwell Ward lies in the central part of the Borough, with a population of 13,197 (2019 population estimate). The ward is represented by three members of the Council. Sitwell is a mainly suburban ward covering the parish of Whiston (population 4,868) together with parts of the adjacent Rotherham suburbs of Broom, Moorgate, and Stag. These areas are heavily owner occupied.

The ward is the least deprived in Rotherham although there is a small, deprived pocket in east Whiston. The south of the ward is rural and very sparsely populated. The hamlets of Morthen, Upper Whiston and Guilthwaite have only 200 residents between them.

The population of Sitwell ward has reduced since 2011 in contrast to the increasing borough population.  The age structure of the population is older than the Rotherham average, with the percentage aged 65+ being well above average.

Sitwell is the fourth most ethnically diverse ward in Rotherham with over 11% from BAME backgrounds, including nearly 8% Asian heritage. The school age population is more diverse, with nearly 30% from BAME communities including 21.4% of Asian heritage.

The number of dwellings in Sitwell has increased by 149 (+3%) since 2011 and there are 143 more households (+3%). With population falling (-1.8%) and both households and dwelling figures growing since 2011, it signals a reduction in average household size.

Sitwell has relatively few local jobs although the ward has strengths in several sectors. Employment levels in the ward depend on opportunities elsewhere such as Rotherham town centre and the hospital, with local jobs were only sufficient for 30% of working age people.

The proportion of working age people claiming benefits in Sitwell is well below the Rotherham average.

Sitwell had better general health than the Borough average in 2011 and the rate of disability was slightly below average for Rotherham, but both were still well above the national average. Disability benefit claim rates are below the Borough average.

Over 70% of health and lifestyle indicators are better (have lower rates) than Rotherham average. Additionally, a half of indicators are significantly better, particularly in terms of lower rates of deaths from circulatory disease under 75 years and hospital stays for self-harm. The period the data relates to is shown as (a) to (f) below and explained in the notes.

Compared to Rotherham average, Sitwell ward is better for (has lower rates/less):

Admissions for injuries in under 15s (b); deaths from causes considered preventable, from circulatory disease all ages, from circulatory disease under 75 years, from coronary heart disease all ages, and from stroke all ages all persons (c); deliveries to teenage mothers (d); emergency hospital admissions for hip fracture in 65+ and for stroke (d); hospital stays for alcohol related harm (broad and narrow definition) and for self-harm (d); incidence of breast cancer, lung cancer and prostate cancer (a); obese Children Year 6 (e).

In contrast, Sitwell ward is worse for (has higher rates/more):

Sitwell ward has well above average infection rates for Rotherham, being the highest of the 25 wards.

Primary and secondary attainment in 2019 was above the Rotherham and national averages.

Levels of recorded crime and ASB in Sitwell are less than the Rotherham average. 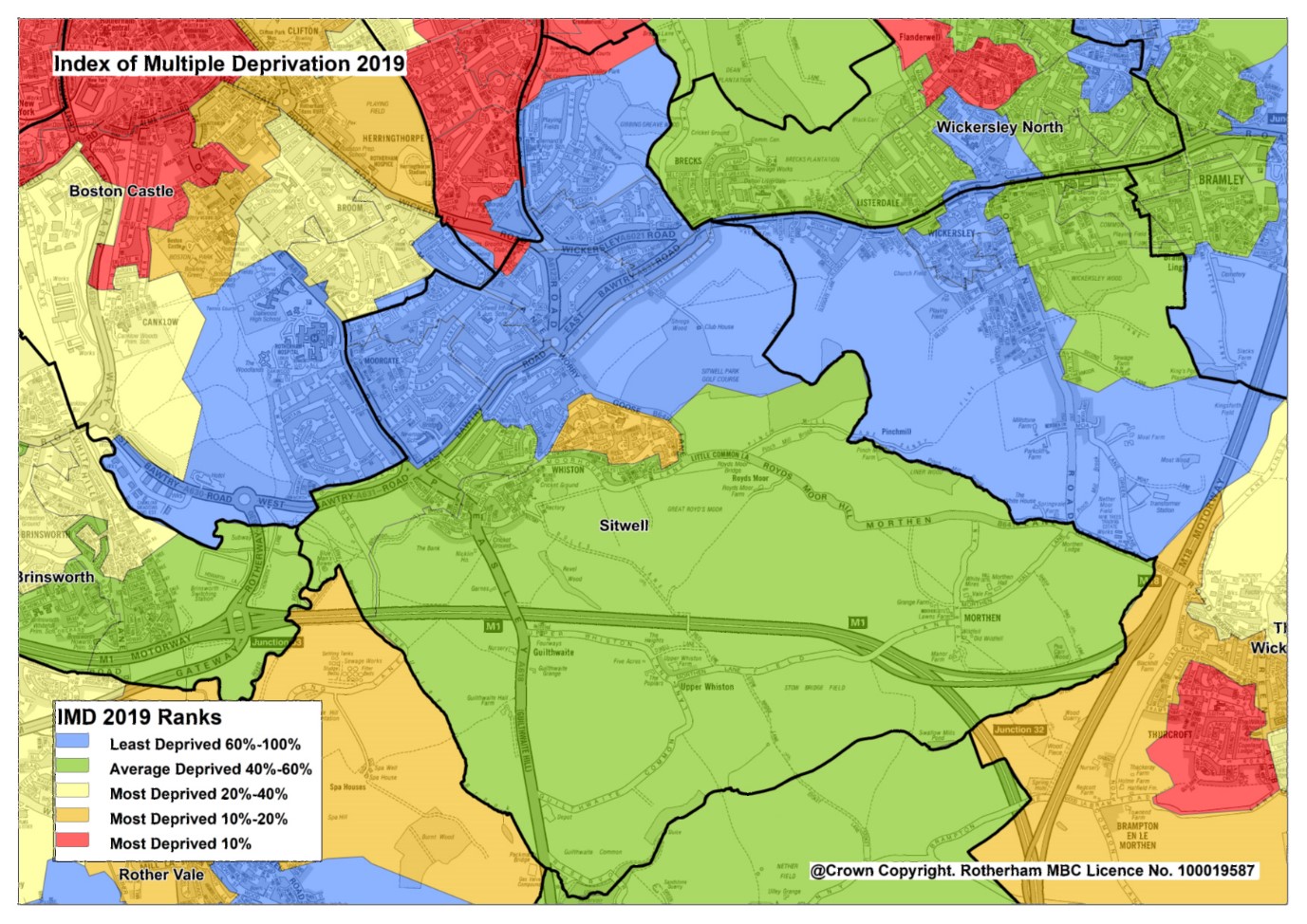