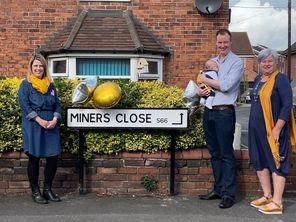 Sunnyside’s latest street has been officially opened by the Mayor of Rotherham, Councillor Jenny Andrews.

Sunnyside’s latest street has been officially opened by the Mayor of Rotherham, Councillor Jenny Andrews.

The event, to celebrate the official naming of Miners Close, was attended by residents, Council Officers, community groups and Councillors Ellis, Hoddinott and Read.

Miners Close is near to Crescent West, an area that is also home to traditional pit houses that were originally built for workers at the nearby Silverwood Colliery.

Local councillors, Cllr Emma Hoddinott, Cllr Chris Read and Cllr Sue Ellis, put forward the name Miners Close to recognise the heritage of the area, which also marked the 25th anniversary of the Miner’s strike at the time. Now the housing development is finished, the new road sign has been erected.

Wickersley North Councillor Emma Hoddinott said: “It’s important that we remember the heritage of our area as new homes are created on the site. The mining traditions across Rotherham are well known and recalled by residents and naming the street after them is a way to pay tribute to the hard-working people that served at the nearby Silverwood Colliery.”

The mine at Silverwood was originally sunk in 1900 and the colliery was closed in 1994.

Afterwards, everyone was invited back to Sunnyside Community Centre, where the amazing volunteers of Sunnyside Supplies made everyone feel at home with a Full English Breakfast, hot drinks & plenty of biscuits!

There was an opportunity to take a look at fascinating displays of artefacts and local memorabilia provided by the wonderful volunteers of Silverwood Colliery Heritage Group, whilst information on positive well-being, keeping safe and how to get involved in the community was available to mull over, whilst enjoying a cuppa & a chat with friends and neighbours.

A big thank you from the Neighbourhoods Team and Councillors to everyone who was part of the event, for making it such a special occasion!