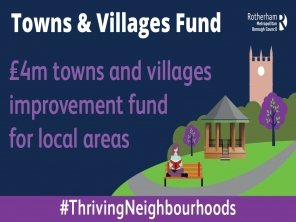 The first six schemes in a £4 million package to put the pride back into neglected areas of the borough are set to be given the go ahead.

Rotherham Council pledged the investment in smaller town and village centres as part of its Towns and Villages Fund (TVF). The money has been specifically earmarked for areas of the borough which are not being supported through national Government funding schemes, such as Levelling up and Towns Fund monies.

Since the Council funding was confirmed, local councillors have been working with their communities to draw up a wish list of sites they want to see improved.

Councillor Sarah Allen, Deputy Leader and Cabinet Member for Neighbourhood Working, said: "In their role as community champions, members have been engaging with their communities over the last few months to identify the unloved parts of their ward that could benefit from this scheme - not only by making areas look nice, but also making them more usable by including facilities like seating, lighting or parking."

The Council's Cabinet will meet on Monday 24 January and are set to give the go-ahead to the first six schemes:

In total, the Council is working towards implementing 23 separate schemes of a similar scale across the borough over the next two years.

TVF money is also being set aside from the for larger scale improvements at Maltby town centre, which it is hoped can be used to lever in further external funding.

Councillor Denise Lelliott, Cabinet Member for Jobs and the Local Economy, said: "We already have a number of transformative projects lined-up for Rotherham Town Centre, alongside future masterplans for Dinnington, Wath and Maltby. But we want to see every community benefiting, right across the borough, which is why we announced this fund last year - and now the programme is starting to take shape.

"Alongside practical improvements at the heart of each community, we hope that these investments also encourage people to shop locally and in so doing give a little extra help to local shops and retailers."

The report to be considered by Cabinet is available to view on the Council's website.