We will be carrying out maintenance work on our website overnight from 10pm. This means that some of our forms may be unavailable. For urgent help call 01709 382121 or dial 999 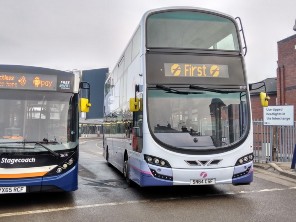 South Yorkshire's Mayor is asking communities to help shape how the region’s public money is used to support buses, to protect routes at risk from cuts.

Passengers in the region face the loss of a third of the bus network this autumn, when government funding provided to operators throughout the pandemic ends.

Mayor Coppard and council leaders have already stepped in with over £5 million from the region’s emergency budget to protect school buses.

But the public budget for South Yorkshire’s buses – paid through people’s council tax - will only stretch to cover half of the remaining services bus companies plan to cut.

South Yorkshire’s Mayor Oliver Coppard said; “We are facing the biggest and most devastating bus cuts for a generation, because of a broken system which is failing passengers.

“A reliable, affordable, clean bus service is vital, not just so everyone can get to where they need to go, but so they can get there without using a car, cutting the toxic traffic choking our region.

“As the private sector bus companies look to cut services, I’ve said I’ll do everything I can to keep our buses going until I get the powers and money I need to transform the network.

“We’ve stepped in with emergency money to support school buses, I’m moving as fast as the law currently allows to assess bringing in more public control through franchising, and I’ve called on the government for emergency funding to keep services going.

“But the budget we have to support buses is limited and will not stretch to fill all the gaps. Public money can only buy back around half the services bus companies plan to cut.

“So, we’re asking for people’s views because we need to make sure we’re making the most effective use of the money we have, to pay for services where communities rely on them the most.”

Under South Yorkshire’s current system, bus companies are free to decide where and when they will run services. When bus companies withdraw services, as they are expected to do in October when government funding stops, SYMCA can pay other companies to run the route.

Between October 2022 and April 2023, South Yorkshire’s public budget to support bus services – part of the council tax residents pay for public transport – is £11.9 million. It is estimated to cost at least £23 million to replace all the services that bus companies plan to remove.

People can give their views on support for bus services at www.travelsouthyorkshire.com/haveyoursay, by picking up a paper survey from a Travel South Yorkshire Interchange or by calling Traveline on 01709 515151.