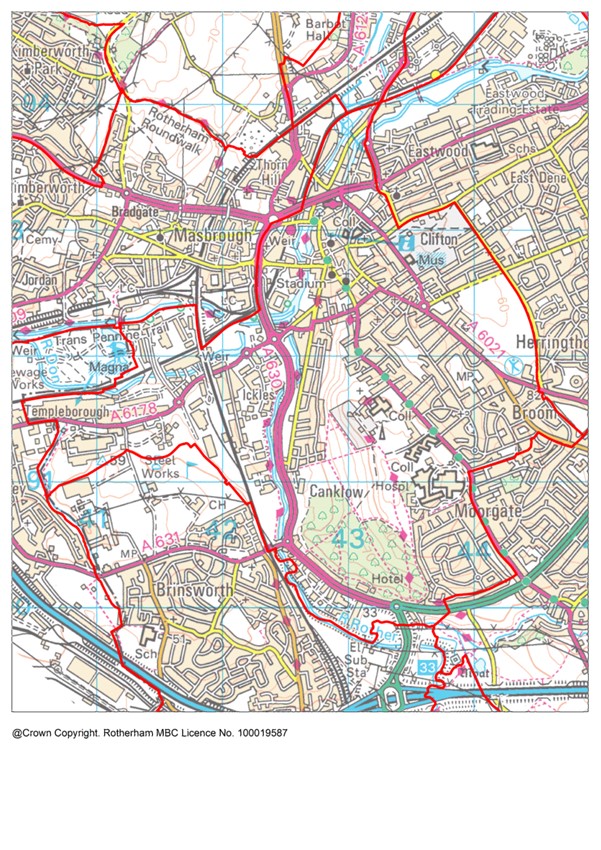 Boston Castle has a population of 16,755 (2019 estimate) and covers an in central and south-central Rotherham. The ward is represented by three members of the Council. The ward covers Rotherham Town Centre and residential areas to the south including Canklow, Wellgate, Broom Valley and parts of Clifton and Moorgate.
Boston Castle is the most diverse ward in Rotherham with an extensive retail and commercial area in the town centre, industrial areas at Templeborough and Ickles, deprived council estates, inner urban flats including a high-rise block, terraced housing and affluent suburbs. The ward also has the highest minority ethnic population in Rotherham. Deprivation is widespread in the ward with the Town Centre and parts of Clifton and Canklow being the most deprived. Moorgate is the least deprived, being fairly affluent.
The ward contains many Rotherham landmarks and facilities such as the General Hospital, the Magna Science Adventure Park, New York Stadium (Rotherham United FC), Clifton Park and Museum, Boston Park and Castle, Rotherham (RNN) and Thomas Rotherham Colleges. In the south of the ward is Canklow Woods.
Rotherham Central railway station is situated in the ward which includes tram / train services of Sheffield Supertram.

Population change since 2011: +1269 (+8.2%) (Rotherham +3.2%)
The population of Boston Castle ward has increased significantly since 2011 reflecting an increase in housing stock and migration. The age structure of the population is younger than Rotherham as a whole with 60% of residents aged under 65 compared with the borough average of 53%.

Boston Castle is the most ethnically diverse ward in Rotherham with a third of the population being from BAME backgrounds, primarily Asian heritage. It is one of two wards with non-British white exceeding 4% and Black / Black British exceeding 2%.

Boston Castle has a diverse housing mix with a high proportion of social and private rented flats, mainly in the northern inner urban part of the ward, where there is also terraced housing. The suburban south of the ward has mainly owner occupied detached and semi-detached housing. Most of the social rented housing are in the form of flats, with a significant proportion rented from housing associations.
Council Rented Properties in 2020: 1,005 (561 houses and 444 flats), 14% of dwellings.

Over a quarter (26%) of all jobs in Rotherham Borough are located in Boston Castle ward, mainly in the town centre. The local council and general hospital are the biggest employer in the ward. Almost half of employment is in public services and only 17.3% is in production industries. There are 2.4 times as many jobs as people of working age in the ward, which relies heavily on workers coming in from other areas.

The proportion of working age people claiming benefits in Boston Castle is above the Rotherham average.

Child poverty in Boston Castle is well above and double the borough average.

Over 60% of health and lifestyle indicators are worse (have higher rates) than Rotherham average. Additionally, a third of indicators are significantly worse, particularly in terms of low birth weights, emergency hospital admissions for Myocardial Infarction (heart attack) and hospital stays for alcohol related harm (Narrow definition). The period the data relates to is shown as (a) to (f) below and explained in the notes.
Compared to Rotherham average, Boston Castle ward is better for (has lower rates/less):
Smoking prevalence at 15 years regular and at 15 years regular or occasional (2014); emergency hospital admissions for Chronic Obstructive Pulmonary Disease (COPD) (d); incidence of lung cancer (a).
In contrast Boston Castle ward is worse for (has higher rates/more):
A and E attendances and emergency admissions in under 5s (b); deaths from all causes all ages, all causes under 75 years, coronary heart disease all ages, stroke all ages all persons (c); deliveries to teenage mothers (d); emergency hospital admissions for all causes, CHD and Myocardial Infarction (heart attack) (d);
hospital stays for alcohol related harm (broad and narrow definition) and self-harm (d); incidence of prostate cancer (a); low birth weight of term babies (d); obese children reception year and year 6 and children with excess weight Year 6 (e)
Boston Castle ward has higher lower (worse) life expectancy at birth compared to Rotherham overall (1.7 years less life expectancy for men and 0.6 years less for women) (c).
The Top 5 better and worse indicators are shown below (see Notes):

Boston Castle ward has above average infection rates for Rotherham and ranks 6th out of the 25 wards. 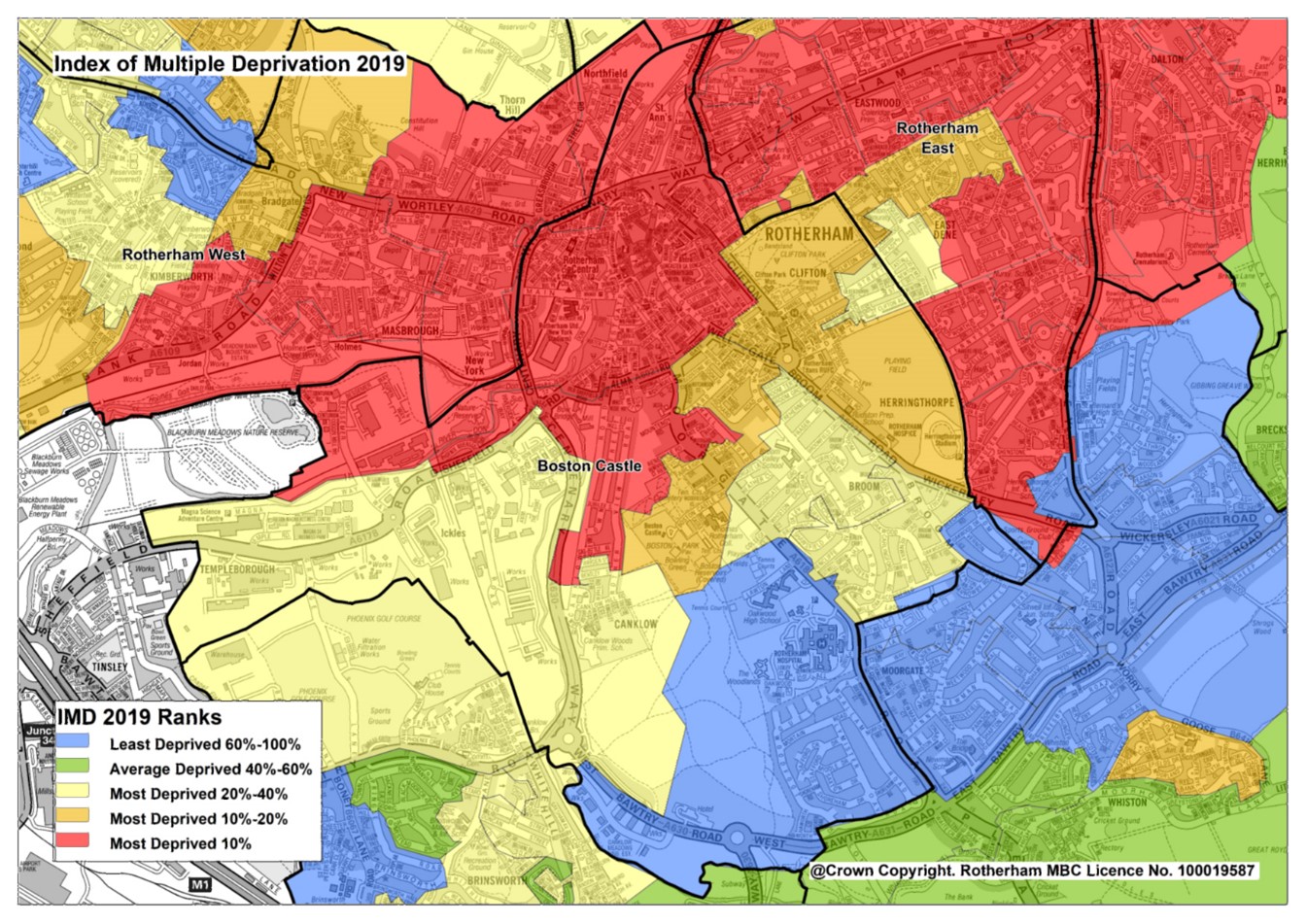 Deprivation in Boston Castle is well above the Borough average and in most of the ward is also well below the national average. There are 2 neighbourhoods which are more deprived than the ward average, they are Canklow north and the town centre within the most deprived 10% of England.

Income deprivation is above average in Boston Castle for all age groups. Children are more likely to be affected by income deprivation than adults, with the level being above the Borough average.