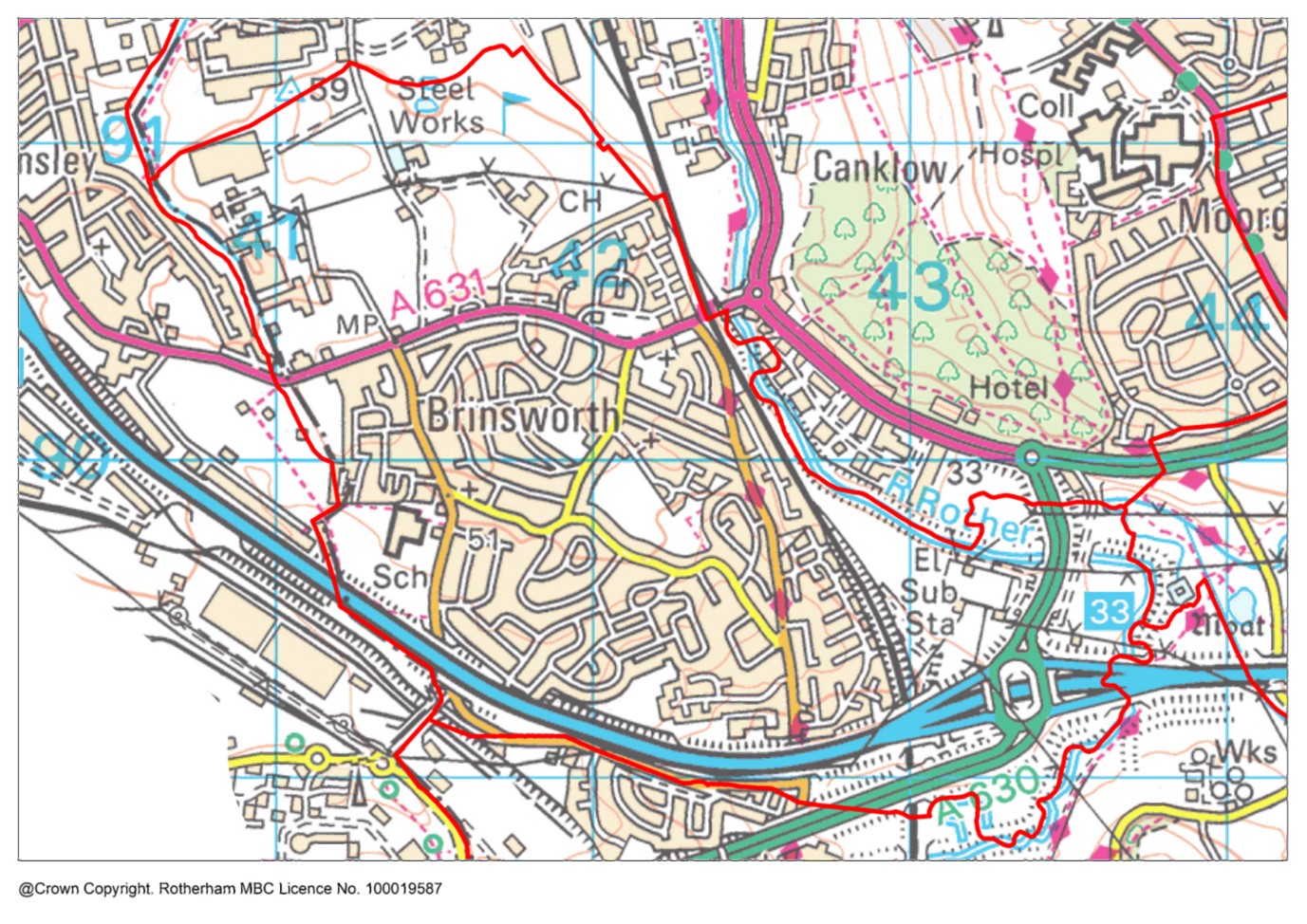 Brinsworth ward lies in the west of Rotherham Borough, with a population of 8,757 (2019 population estimate). Most of the residential population live in the parish of Brinsworth (population 8,757) with the remainder in the Pheonix area north of Bawtry Road.

Suburban housing predominates in Brinsworth and is popular with commuters to both Rotherham and Sheffield. Junction 33 of the M1 motorway is situated in the ward. Although there are deprived pockets, the ward is generally less deprived than average for Rotherham.

The population of Brinsworth ward has hardly changed since 2011 in contrast to the increasing borough population.  The age structure of the population is similar to the Rotherham average.

Brinsworth is among the 80% of wards in Rotherham where the white British population exceeds 90%. However, the 2020 School and Pupil Census shows BAME heritage accounting for over 10%.

Brinsworth has a high proportion of owner-occupied semi-detached housing which makes up two thirds of all homes in the ward. There are notably few flats, most of which are social rented.

Over 50% all of jobs in Brinsworth are based in education, meaning public sector jobs in the ward are well above the borough average. Employment levels in the ward depend on opportunities in other areas as local jobs account for 14% of local workers in 2019.

The proportion of people claiming benefits in Brinsworth is below the Rotherham average.

Child poverty in Brinsworth is below the Borough average.

Over 70% of health and lifestyle indicators are better (have lower rates) than Rotherham average. Additionally, a quarter of indicators are significantly better, particularly in terms of lower rates of emergency hospital admissions and incidence of cancer. The period the data relates to is shown as (a) to (f) below and explained in the notes.

Compared to Rotherham average, Brinsworth ward is better (has lower rates/less) for:

Deaths from all causes all ages, deaths from all causes under 75 years, deaths from causes considered preventable, circulatory disease all ages, coronary heart disease all ages, and from respiratory diseases all ages all persons (c); emergency hospital admissions for all causes including CHD, Chronic Obstructive Pulmonary Disease (COPD), hip fracture in 65+, Myocardial Infarction (heart attack) and strokes (d);  incidence of all cancer including breast cancer and prostate cancer (a); Hospital stays for alcohol related harm and for self-harm (d).

In contrast Brinsworth ward is worse for (has higher rates of):

A and E attendances in under 5s (b); deaths from circulatory disease under 75 years (c); obese children in Reception Year and Year 6 (e).

Brinsworth ward has slightly above average infection rates for Rotherham and ranks 8th out of the 25 wards.

Levels of recorded crime and ASB in Brinsworth are less than half the Rotherham average. 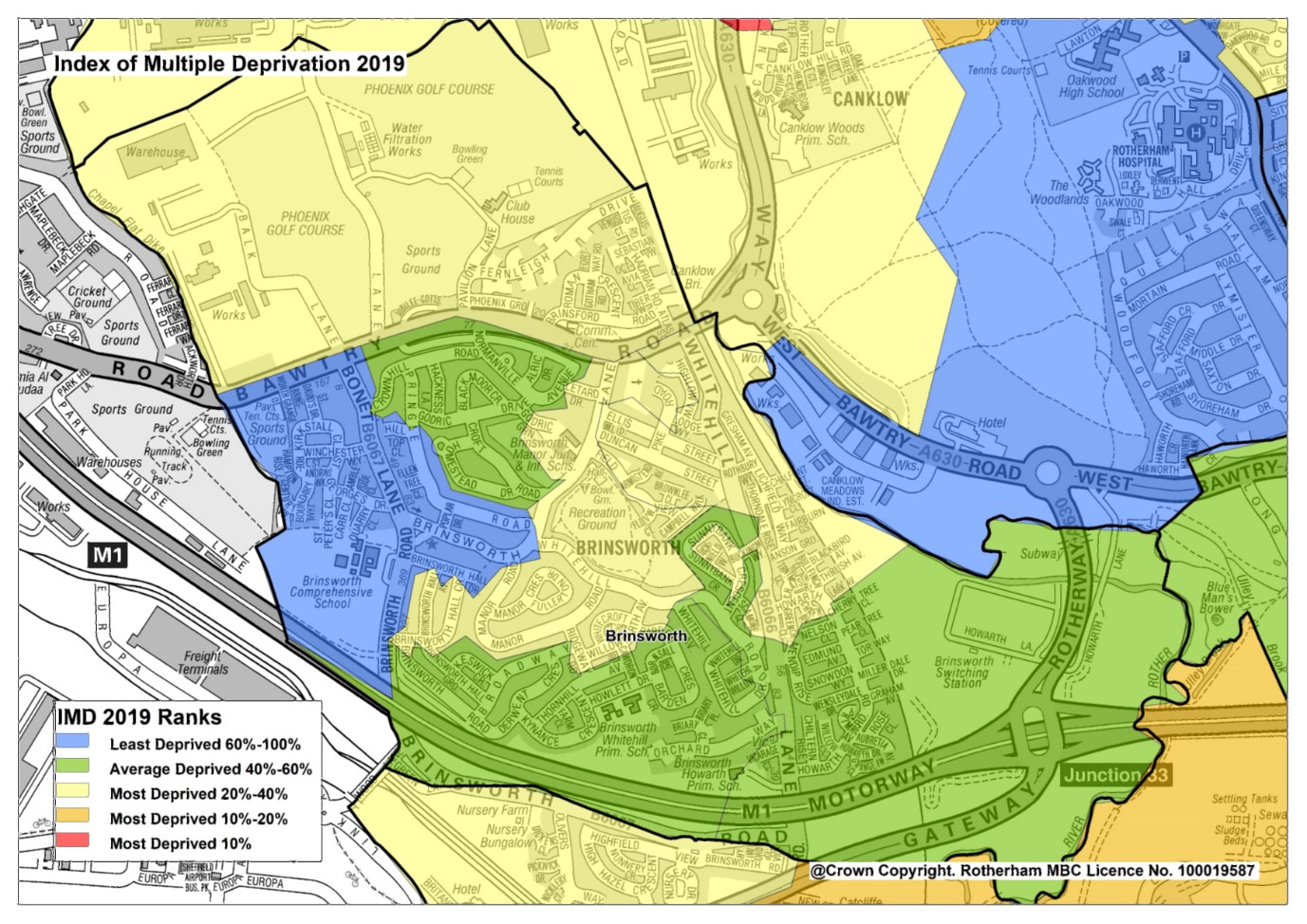 Deprivation in Brinsworth is below the Borough average and in most of the ward is also well below the national average. There are 2 neighbourhoods (Brinsworth North East and Brinsworth Manor) which are more deprived than the ward average, however no neighbourhoods are within the most deprived 10% of England.

Income deprivation is below average in Brinsworth for all age groups. Whilst children are more likely to be affected by income deprivation than adults, however the level is still well below the Borough average.