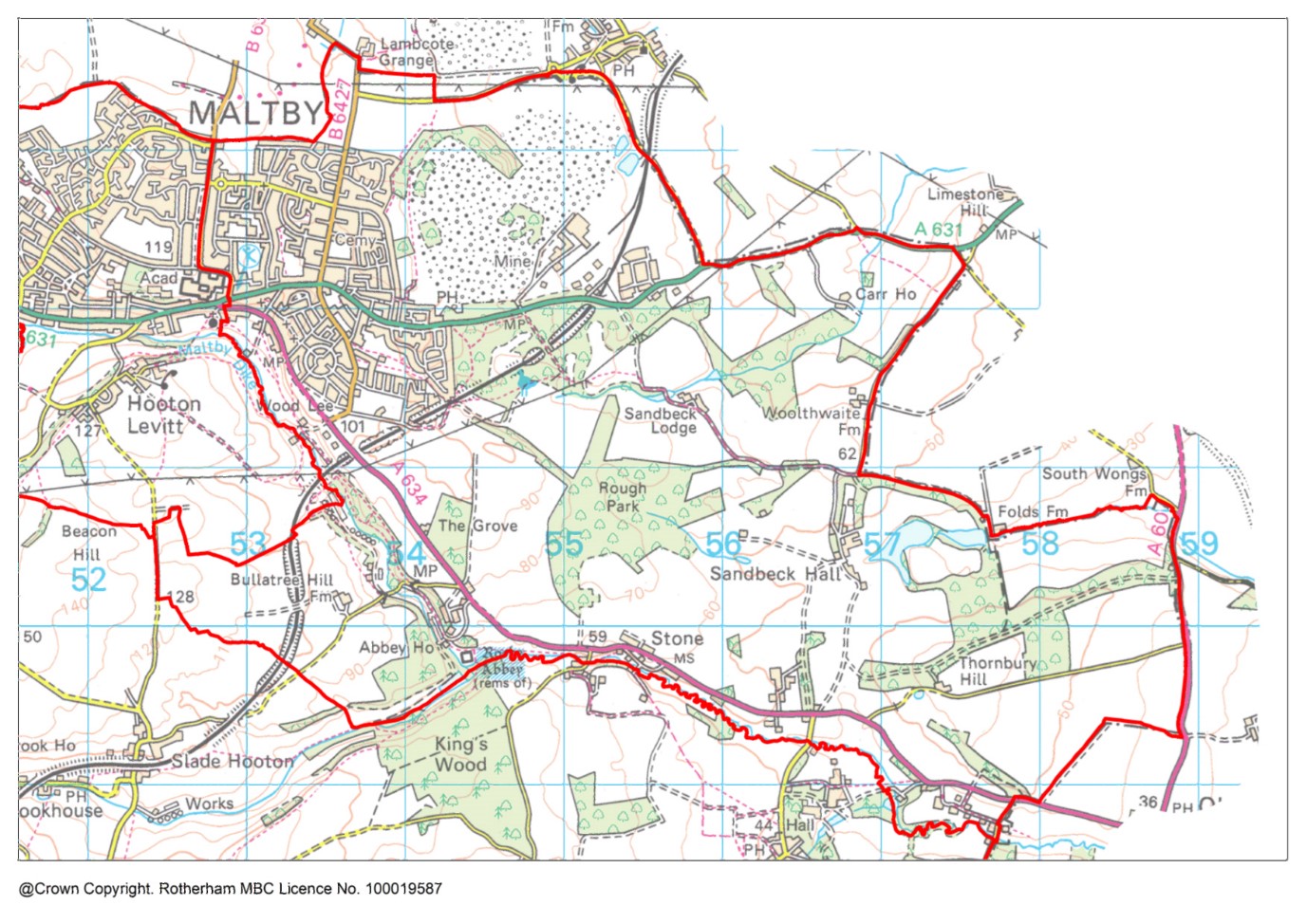 Maltby East ward lies in the east of the Borough with a population of 9,434 (2019 population estimate). Maltby is a small, former mining town with 16,500 residents. Maltby East is co-terminus with the East Ward of Maltby Town Council (total Town population 16,472). The ward has fairly high levels of deprivation, especially in the south east of the town.

Coal mining was a major local employer but Maltby Main, the last coal mine in Rotherham, closed in 2013. Apart from the urban area of Maltby, the ward covers a large but very sparsely populated rural area, including Roche Abbey, a Cistercian monastery founded in 1147.

The population of Maltby East ward has hardly changed since 2011 in contrast to the increasing borough population.  The age structure of the population is significantly younger than the Rotherham average with the percentage of children aged 0-15 being well above average.

Maltby East has a diverse housing stock with a relatively high proportion of terraced houses which are of mixed tenure with almost half being rented. Most households (54%) are owner occupied but the private rented sector is larger than average, and a significant proportion of social rented housing is rented from housing associations.

There is a low proportion of local employment in production industries and a high proportion employed in Education and the largest employer being motor trades, wholesale, and retail. Employment levels in the ward depend on opportunities in other areas as local jobs were only sufficient for 26% of the working age population.

The proportion of people claiming benefits in Maltby East is well above the Rotherham average.

Child poverty in Maltby East is well above the Borough average.

Maltby had rates of poor health and disability above the Borough average in 2011 and much higher than the national average, reflected in higher claim rates for disability benefits.

Over 80% of health and lifestyle indicators are worse (have higher rates) than Rotherham average. Additionally, two-thirds of indicators are significantly worse, particularly in terms of higher rates of emergency hospital admissions and premature deaths. The period the data relates to is shown as (a) to (f) below and explained in the notes.

Smoking prevalence at 15 years regular and regular or occasional (2014).

In contrast Maltby East ward is worse for (has higher rates/more):

Admissions for injuries in 15 to 24 year olds and in under 15s (f); children with excess weight reception year and obese children in reception year (e); deaths from all cancer all ages, from all cancer under 75 years, from all causes all ages, from all causes under 75 years, from causes considered preventable, from circulatory disease all ages, from circulatory disease under 75 years, from coronary heart disease all ages and from respiratory diseases all ages all persons (c); emergency hospital admissions for all causes, CHD, Chronic Obstructive Pulmonary Disease (COPD), Myocardial Infarction (heart attack) and stroke (d); hospital stays for alcohol related harm (Broad and Narrow definition) and self-harm (d); incidence of breast cancer, colorectal cancer and  prostate cancer (a); limiting long-term illness or disability (2011).

Maltby East ward has below average infection rates for Rotherham and ranks 15th out of the 25 wards.

Levels of recorded crime and ASB in Maltby East are more than the Rotherham average. 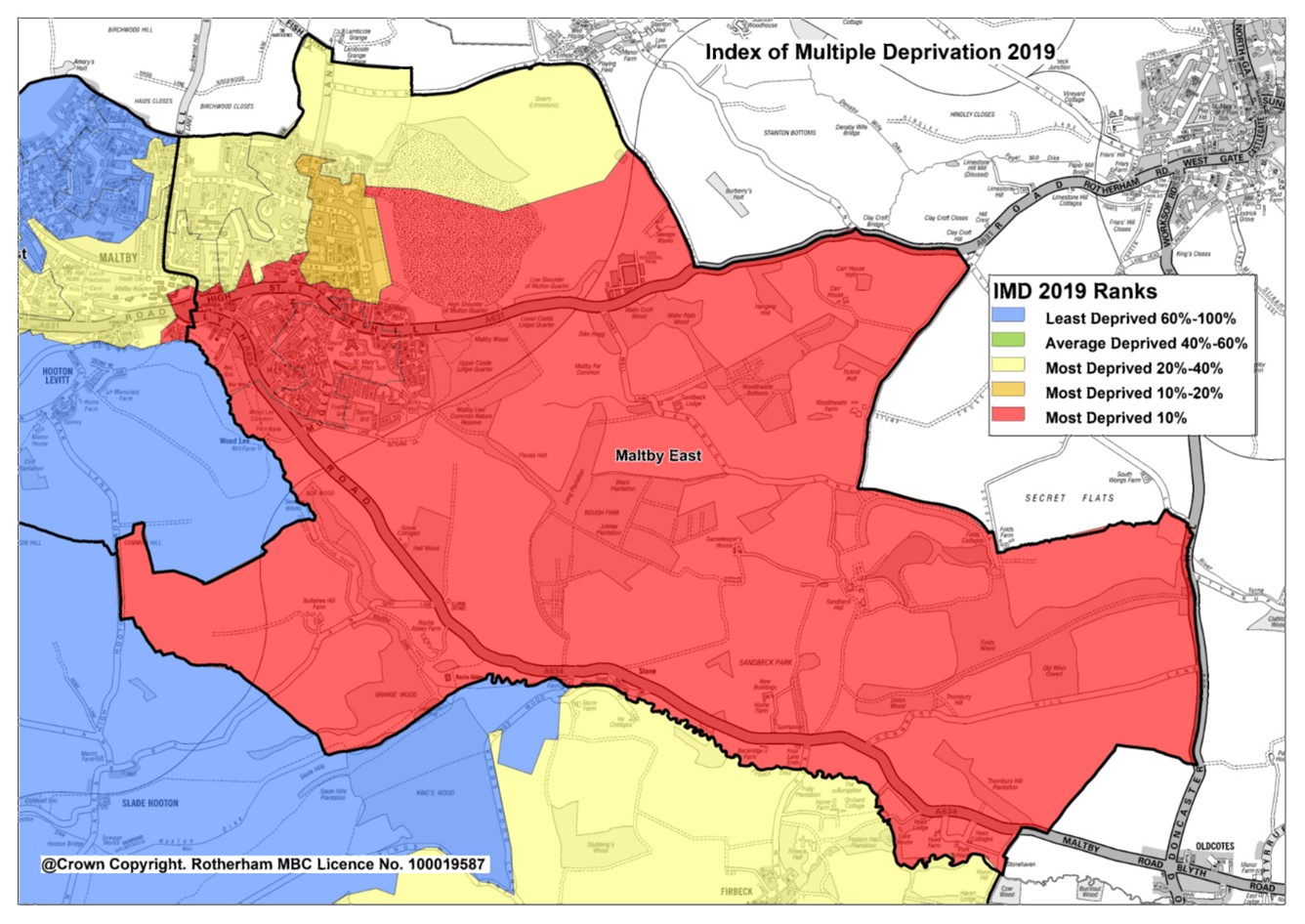 Income deprivation is above average in Maltby East for all age groups. Children are more likely to be affected by income deprivation than adults, with the level being well above the Borough average.