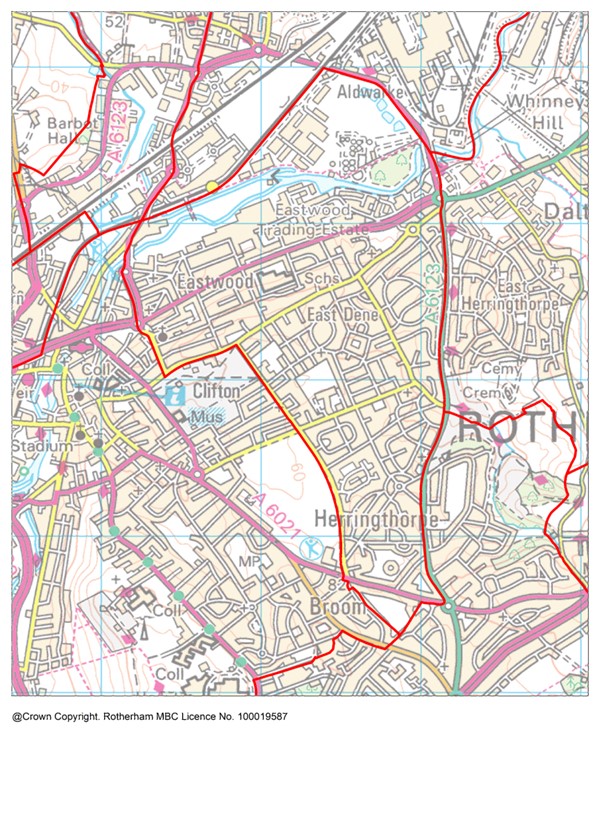 Rotherham East lies in the central part of Rotherham, with a population of 17,499 (2019 population estimate). The ward is represented by two members of the Council Rotherham East is a compact urban ward, combining several residential areas to the east of Rotherham Town Centre. The neighbourhoods included are Eastwood, Springwell Gardens, East Dene and parts of Clifton.

The ward is the most deprived in Rotherham, with almost all neighbourhoods affected (see Index of Multiple Deprivation). Eastwood Village is a multi-ethnic area with much private rented terraced housing. East Dene is mainly council housing although many homes are now privately owned. Clifton has older private housing, mainly terraced. In the north of the ward is the Eastwood Trading Estate although most people rely on the nearby town centre for work.

The number of dwellings in Rotherham East has increased by 397 (+6%) since 2011 and there are an additional 398 households (+6%). These increases are level in the growth in population (+6.2%), indicating average household sizes remained constant.

Most housing in Rotherham East is rented, with high proportions of social housing. Owner occupied dwelling account to 38% of all properties with the majority being semi-detached. Terraced housing and private renting dominate in the inner areas of Eastwood and Clifton but East Dene and Herringthorpe have mainly semi-detached housing rented from the Council. A significant proportion of social housing is rented from housing associations. The ward has the lowest proportion of detached houses in Rotherham.

The ward has a high proportion of employment in manufacturing and production activities, mainly in the Eastwood Trading Estate. The ward only has enough jobs for 32% of local working age residents, depending heavily on employment in neighbouring wards.

The proportion of people claiming benefits in Rotherham East is well above the Rotherham average.

The level of child poverty in Rotherham East is the highest of any Rotherham ward and is over double the borough average.

Rotherham East had higher rates of poor health and disability than the Borough average in 2011 and much higher than the national average. Claims for disability benefits are well above average.

Over 85% of health and lifestyle indicators are worse (have higher rates) than Rotherham average. Additionally, a half of indicators are significantly worse across many areas but particularly in terms of exceptionally high levels of emergency hospital admissions for Chronic Obstructive Pulmonary Disease (COPD), deaths from causes considered preventable and from circulatory disease under 75 years and emergency hospital admissions for stroke. The period the data relates to is shown as (a) to (f) below and explained in the notes.

Compared to Rotherham average, Rotherham East ward is better for (has lower rates/less):

In contrast Rotherham East ward is worse for (has higher rates/more):

A and E attendances and emergency admissions in under 5s (b); admissions for injuries in under 15s and in under 5s (f); children with excess weight reception year and year 6, and obese children reception year and year 6 (e); deaths from all cancer all ages, all cancer under 75 years, all causes all ages, all causes under 75 years, causes considered preventable, from circulatory disease all ages and under 75 years, from coronary heart disease all ages, from respiratory diseases all ages all persons, from stroke all ages all persons (c); deliveries to teenage mothers (d)

Rotherham East ward has well above average infection rates for Rotherham and ranks 5th out of the 25 wards.

Levels of recorded crime and ASB in Rotherham East are more than the Rotherham average. 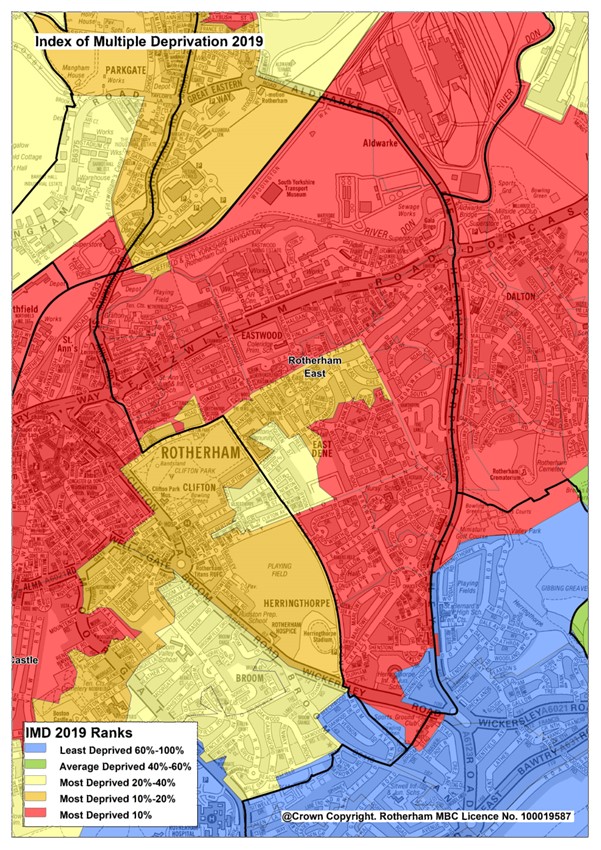 Income deprivation is above average in Rotherham East for all age groups. Children are more likely to be affected by income deprivation than adults, with the level being double the Borough average.

The IMD is not published for wards but the average SOA score in Rotherham east is 58, well above the Rotherham East average score of 29 (28 in 2015), with an SOA equivalent rank of 1,491 (5th percentile).