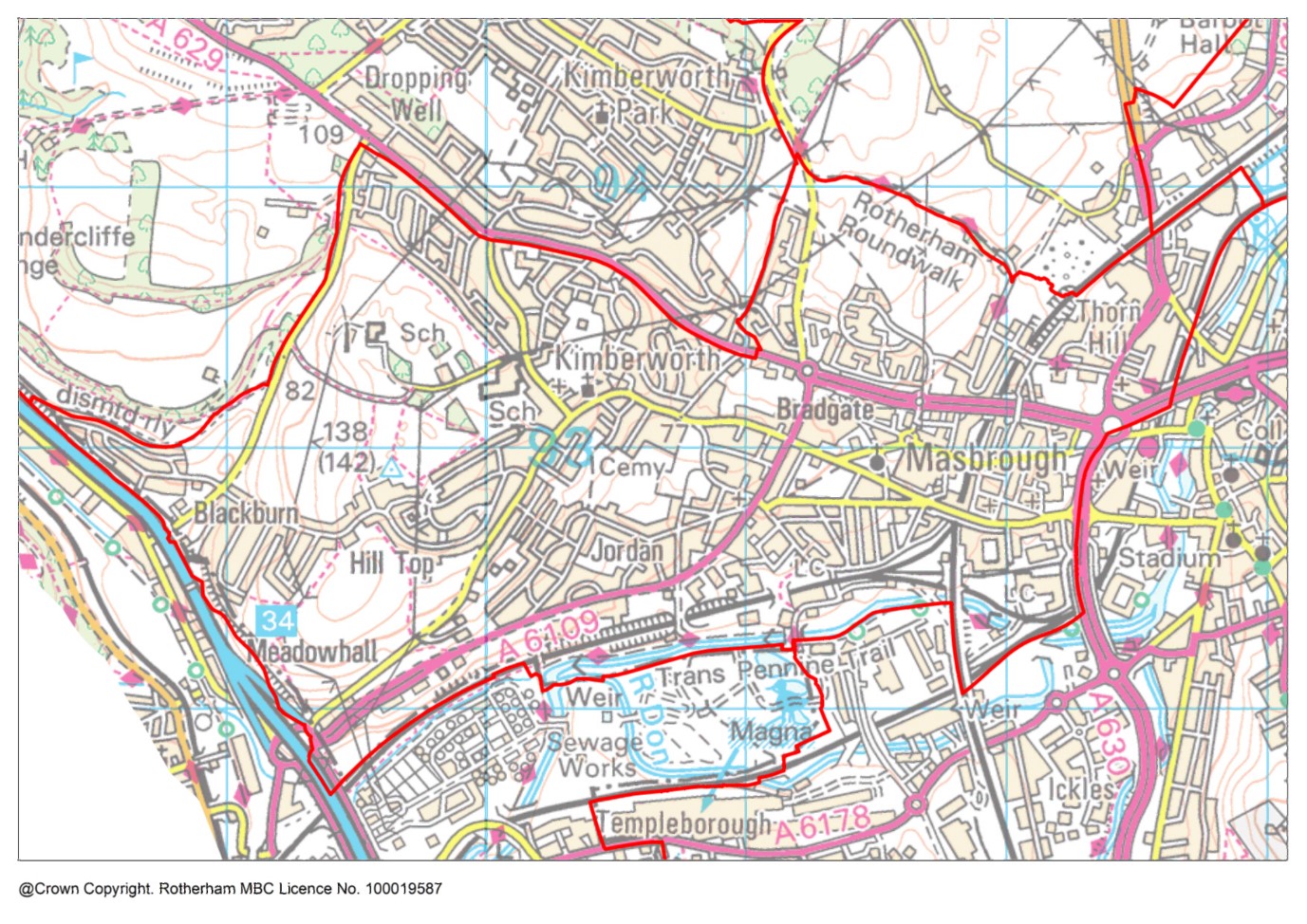 Rotherham West lies in the west central part of Rotherham, with a population of 14,937 (2019 population estimate). The ward is represented by two members of the Council. Rotherham West extends west from the town centre at Centenery Way, through the inner urban neighbourhoods of Masbrough, Ferham, Bradgate and Meadow Bank to more suburban areas at Kimberworth, Hill Top and Blackburn.

Masbrough and Ferham have high minority ethnic populations, much terraced housing and high levels of deprivation. Private semi-detached housing predominates in the western part of the ward such as Kimberworth. Most of the ward is residential but there are industrial areas in the south by the canal and east close to the town centre.

The population of Rotherham West ward has increased since 2011, broadly in line with the borough average.  The age structure of the population is younger than the Rotherham average, with the percentage of residents aged 65+ being well below average.

Rotherham West has a relatively high proportion of terraced housing of diverse tenures although like housing overall, the majority are owner occupied. There is a significant private rented sector, notably in terraced housing in the east of the ward.

Rotherham West had general health similar to the Borough average in 2011 although disability was below average for Rotherham, still well above the national average. The DLA claim rate was slightly below the Rotherham average in 2015.

Over 60% of health and lifestyle indicators are worse (have higher rates) than Rotherham average. Additionally, a quarter of indicators are significantly worse, particularly in terms of higher rates of childhood obesity and hospital admissions for injuries in under 5’. The period the data relates to is shown as (a) to (f) below and explained in the notes.

Compared to Rotherham average, Rotherham West ward is better for (has lower rates/less):

Admissions for injuries in 15 to 24 year olds (f); deaths from stroke all ages all persons (c); emergency hospital admissions for hip fracture in 65+ (d); incidence of breast cancer and prostate cancer (a); smoking prevalence at 15 years regular and

In contrast, Rotherham West ward is worse for (has higher rates/more):

Admissions for injuries in under 15s and in under 5s (f); children with excess weight year 6, obese children year 6 and reception year (e); deaths from all causes under 75 years and from causes considered preventable (c); deliveries to teenage mothers (d); emergency admissions in under 5s (d); incidence of colorectal cancer and lung cancer (a).

Rotherham West ward has well above average infection rates for Rotherham with the second highest of the 25 wards.

Primary and secondary attainment in 2019 was below the Rotherham and national averages.

Levels of recorded crime and ASB in Rotherham West are more than the Rotherham average. 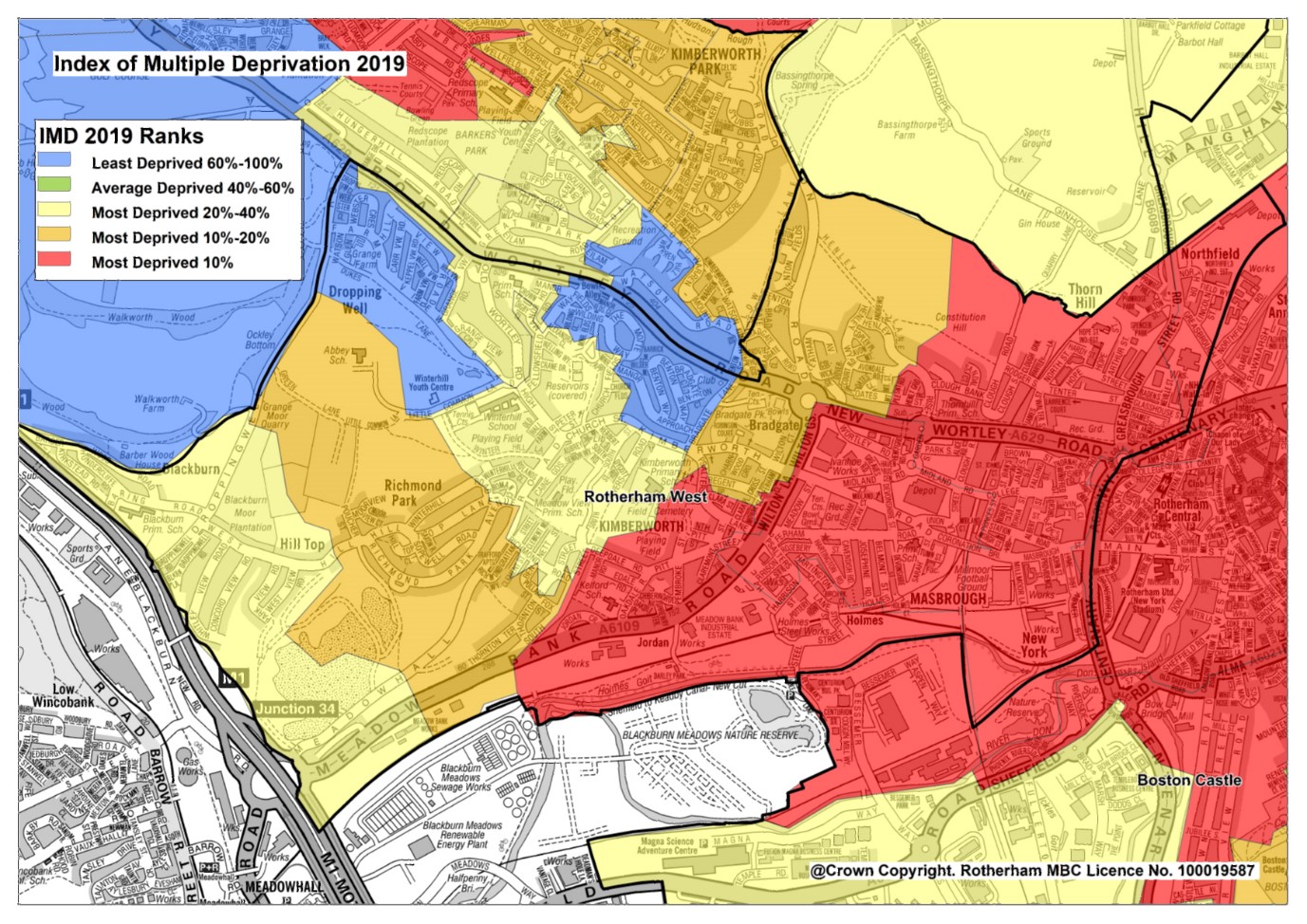 Income deprivation is above average in Rotherham West for all age groups. Children are more likely to be affected by income deprivation than adults, with the level being above the Borough average.

The IMD is not published for wards but the average SOA score in Rotherham West is 37, well above the Rotherham West average score of 29 (28 in 2015), with an SOA equivalent rank of 8,267 (25th percentile).